When people talk about lithium batteries being “dangerous”, what they are really talking about are short circuits. A short circuit is when the positive terminal of a battery is somehow able to come in contact with the negative terminal of the battery, without anything in between to slow down the charge flow. Basically, the battery starts dumping energy into itself as quickly as it can, and with no where for the energy to go, it turns into heat. This is how lithium batteries can lead to fires in extreme cases.

When using a VRUZEND kit, if you follow the instructions when connecting batteries in series and in parallel, you won’t every experience a short circuit. However, if you aren’t paying attention or don’t understand how to connect batteries together, you can accidentally create a short circuit between one or more battery cells.

How a short circuit is made

A simple short circuit could be caused by connecting both terminals on a single cell.

This type of short circuit would be fairly difficult to achieve with your VRUZEND kit because most connections will be made with busbars instead of wires, so the two terminals on opposite ends of the cells won’t be able to reach each other.

However, a multi-cell short circuit would be easier to create with the VRUZEND kit. This is where multiple cells are oriented in such a way that their opposite terminals could be connected into a short circuit, where the positive and negatives are all connected in a loop.

Imagine two cells in VRUZEND terminal caps, oriented opposite to each other. This would be how you’d start building a larger battery pack. A connection on one end would create a series connection, as you’d be connected the positive terminal of one cell to the negative terminal of the other cell. That’s fine – that’s actually how a series connection is supposed to work. The problem arises if you were to accidentally connect the other two terminals together also. That would create a circuit loop that runs through both cells with nothing in between them except for the bus bars. That would be a short circuit that could begin to overheat and destroy the battery cells, potentially resulting in a fire or explosion. 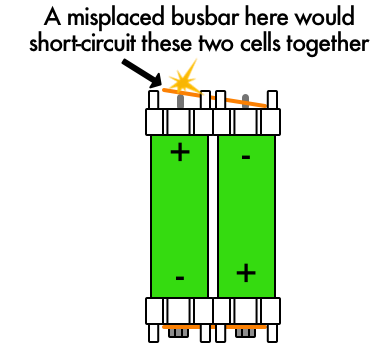 This type of short circuit can occur more easily during your pack construction. Something as simple as dropping a busbar on top of a partially finished battery can easily create this short circuit if the busbar lands between two cells that are connected in series on the bottom of the battery. Even a screw driver or hair pin could create a short circuit between two or more cells like this – anything metallic or conductive that could bridge that gap. Believe it or not, a sweaty palm could create a short circuit between battery cells if the conditions are right. All the more reason to wear gloves while building your battery!

What to do if you make a short circuit

Before you start working on your battery, you should have prepared your work area by removing any unnecessary metal and making sure you have a fire extinguisher nearby, just in case. You should also have a clear path to the outdoors, if possible, just in case you need to remove your battery.

If you accidentally create a short circuit, such as by dropping a busbar in the wrong place, you’ll likely see sparks as soon as the conductive object makes contact. Do not panic. If the short circuit was a glancing blow, as in the conductive material was removed immediately, then it is likely that no harm was done. A very short duration for a short circuit isn’t great for the battery, but it is unlikely to cause much lasting damage or result in a dangerous scenario.

Sometimes, a short circuit can weld itself together. A sufficiently strong current flow can weld in place whatever metal piece caused the short circuit. This is a bigger problem, because the short circuit will remain and current will be flowing. Again, do not panic. The first thing you want to do is attempt to remove the short circuit condition, likely by removing the part that caused the short. If possible, grab the metal and pull it away. It will quickly begin to heat up though, so if you don’t get to it within a couple seconds and you aren’t wearing gloves, you’ll need to use a tool to avoid burning fingers. Another great reason to wear gloves! A wooden or plastic tool is preferable for prying up whatever is causing the short, as it will keep you from accidentally making any more shorts with a metal tool.

If you absolutely can not remove the offending conductive part and your battery is stuck in a short circuit condition, then you’ll need to remove the battery from your work area. It will likely eventually enter thermal runaway, which will cause the cells to overheat and vent hot gas. If the battery is around other flammable materials, such as a wooden work desk, it could cause a fire.

Once you have the short circuited battery in a clear area, you’ll need to watch it and let it burn itself out. It will likely release a lot of gas and flame. In some cases, individual cells may explode. If possible, dousing the battery with water can help prevent thermal runaway of nearby cells that didn’t experience short circuits. Don’t get too close to the battery though – a garden hose can help you maintain your distance.

Most common fire extinguishers don’t work very well on lithium batteries once they have begun thermal runaway – they are simply too hot. Plenty of water works better. A fire extinguisher is still an important tool to keep around though, as it can help keep the battery from catching other things in the vicinity on fire.

Once the battery has burned itself out, let it cool off for many hours. Water and/or dirt can help cool it faster. Lastly, you’ll need to dispose of it in an environmentally safe manner. Contact your local municipality and ask about how to dispose of lithium batteries or other hazardous waste materials.

If for some reason you can’t remove the battery from your house, such as if you live on the 20th floor of an apartment building, then you’ll want to put the battery in a safe location that won’t lead to anything else catching on fire. An oven in the kitchen or a BBQ grill on the balcony would be a good option. Anything that isn’t flammable and can contain the battery will work.

This article isn’t meant to scare you. Rather, I hope that it will A) teach you how to avoid short circuits, and B) prepare you in case you ever do experience a short circuit.

The best way to make sure you never need to deal with a short circuit is to simply work slowly and carefully. I’ve built hundreds of batteries and rarely ever had an issue with short circuits. The few times I did accidentally make a short, it was always because I got careless and wasn’t paying attention to what I was doing. I either laid a busbar in the wrong place when I working too quickly or dropped a tool on top of the battery. Each time, I quickly removed the part that caused the short and everything was fine.

Always remember to plan out your moves in advance and work slowly to ensure that you know what you’re doing and when you’re going to do it. If you’re careful, you should never encounter a short circuit. But if you ever do, just remember, remain and calm and remove the short circuit condition, or else remove the battery to a safe location and douse with water.