Parallel connections and series connections are the two different orientations for joining battery cells (or any electronics, for that matter).

It is absolutely critical that you understand the difference between parallel and series connections before you begin building your battery. If not, you could end up in a dangerous situation of short circuiting battery cells and causing a fire. Don’t worry though – parallel and series connections are super simple to understand. Once you know how they work, you’ll know exactly how to avoid dangerous scenarios and safely build a battery.

When you connect battery cells in parallel, you increase their capacity. Basically, you are creating one big cell out of several smaller cells. The total capacity of the combined cells is equal to the number of cells connected in parallel multiplied by the capacity of each cell. For example, if you use 3.5 Ah cells and you connect two cells in parallel, you’ve created a single 7 Ah cell. If you did the same with three cells, you’d create a 10.5 Ah cell. You can see this demonstrated in the diagram below. 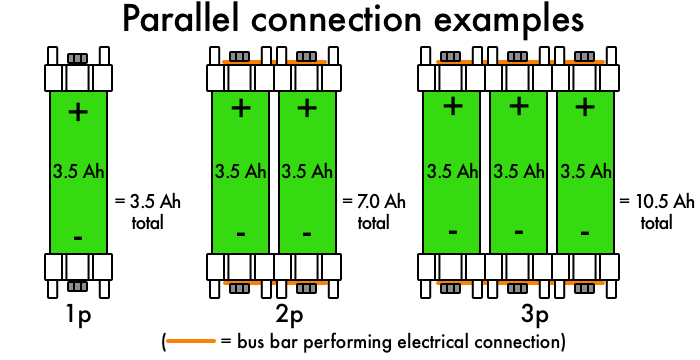 So now you understand how parallel connections work and how they create larger battery cells with more capacity. These larger cells are often referred to as parallel modules, parallel groups, or sometimes just “modules” or “groups” for short.

The other added benefit of creating parallel groups like these is that they can support more current than the single cells they are made from. For example, let’s say that these cells we are connecting in parallel can each support 5 amps, or 5 A. That means that a single cell can power a 5 A load, but it can’t power a larger load or it might overheat. If we have two cells in parallel though, we can double the current carrying capacity of the cells. By creating this two-cell module, we can now power a 10 A load. If we combine three cells in parallel, this three-cell module can support a 15 A load, and so on. That is how you can create higher power batteries simply by adding more cells in parallel. Even “weak” cells that can’t support much power can be connected in parallel, and a sufficient number of them can power a high-power load. But it is always important to ensure that you have enough parallel cells to support your load.

When using the VRUZEND kits, you can’t line the cells up in a line directly like the cells above. Instead you will use the bus bars to create the same electrical connection in a different physical orientation. So the cells will be placed differently, but it will be the same thing, electrically speaking.

To do this, we’ll need to place every other cell upside down. Basically, we’ll alternate between the positive terminal and negative terminal on each cell facing up. The diagram below shows how we can create the same series connection between three cells using the VRUZEND terminal caps. 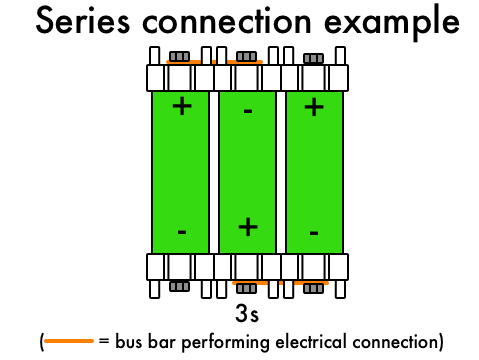 This is the same thing as the three battery cells in a line, except that now they’ve been placed next to each other. Instead of butting up the terminals, the terminals are connected by the bus bars. Either way, the cells are still connected with positive to negative connections between every cell, which makes this a series connection. This process can be extended, theoretically indefinitely, to make long series connections of many cells. The diagram below shows eight cells connected in series.

Note how in the diagram above, each bus bar performing a series connection alternates. For example, the top of the first two cells are connected, but the bottoms of the same first two cells are not connected. For every bus bar performing a series connection on the top of the cells, the same location is not connected on the bottom of the cells, and vice versa. This is extremely important. If you were to connect both the top and bottom of the cells in this orientation, you would create a short circuit. This is because the cells are in an alternating orientation, with the positive end of each cell either up or down, opposite to the orientation before and after the cell.

Remember, parallel cells are connected at both the top and bottom of the cells, but that is only because those cells all face the same way. When the cells face opposite directions, and thus when you are performing a series connection, you have to be careful not to connect both the top and bottom of the same cells. You’ll know that you made this mistake immediately because the bus bars will create sparks when they touch the cell terminals, completing the short circuit.

Even though the total voltage changes with series connections, the capacity in amp hours will remain the same. So if we used 3.5 Ah cells in these examples, even though we have a 3s pack creating an 11.1 V pack, the capacity of that pack will still be 3.5 Ah, giving us a 11.1V 3.5Ah battery pack.

That means that our final pack will have three cells in parallel (assuming 3.5 Ah cells) and 10 cells in series. This would be known as a 10s3p pack, using shorthand notation common in the battery building industry.

There a multiple ways to build a pack like this, but a common method would be to first create 10 parallel groups of three cells each, and then connect those 10 parallel groups together in series. With the VRUZEND kit though, we could snap together all 30 of the VRUZEND terminal caps for each side, then place the cells in all together and press the two sides of caps together. Then we’d use our bus bars to make our series and parallel connections.